Vance Elementary School is our Spotlight School of the Week 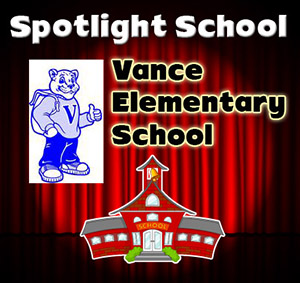 PROGRAM: Can You Dig It?

It was a Friday morning and so everyone was in a fantastic mood. As I walked the halls of Vance Elementary School, there were many hellos and smiling faces from all the students and staff. I was just as excited as everyone because I got to teach one of my favorite programs to fourth grade called, “Can You Dig it?”

This program is really fun because the junior scientists get to be Geologists for the day. We started out the program talking about the layers of the Earth. The students were very bright, as they were able to describe each layer of the Earth. The layer that we were focusing on the most during this program was the crust. This is the layer that Geologists study because they look for many different rocks and minerals. There were three types of rocks that the scientists had the chance to explore: igneous, sedimentary, and metamorphic. As Geologists, the scientists go on an excavation right inside the classroom. They really got into character when they wore their headlamps (We turned the lights off and did the excavation inside of the cave). Not only do they get to do their very own rock excavations, but they also get to perform field tests on all of the rocks and minerals that are found. Some of these tests included magnetism, hardness, and electrical conductivity! The scientists found a lot of different rocks and minerals that they got to take home with them.

Vance Elementary had an amazing time being Geologists for the day. I really hope that I get the opportunity to explore the Earth’s crust with them again one day!