Durant Road Elementary School is our Spotlight School of the Week 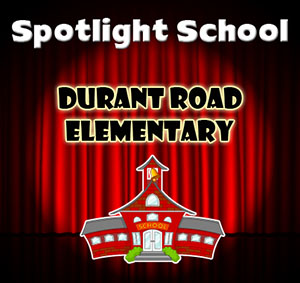 I had the pleasure of spending my Thursday at Durant Road last week and the kindergartners were such an amazing group. They requested Animal Detectives, which is a program that looks at all sorts of animals and how they similar and different from each other. Once we started, I could tell they were very knowledgeable about animals. They listed all sorts of different animals that they knew of, and it was quite a diverse list.

We started off discussing birds and what makes them such a unique group of animals. Then, they grabbed a few beaks and pecked away in search of collecting enough food to fill their nests. Through this experiment, they were able to understand how certain beaks are better able to pick up certain types of food. They quickly discovered that chopsticks were better bird beaks than clothespins. Who would have thought?!

Next, it was time to compare the differences between two wiggling little animals we find in the soil. Students dug through dirt in search for worms and beetle larva. They were such brave scientists and didn’t seem nervous at all.

One of my favorite portions of the program was when I got to bring out Pineapple, our armadillo lizard and Minnie, the ball python. The students really enjoyed having the opportunity to touch these animals and even ask the several different questions their little minds come up with. They really got a kick out of Pineapple’s name because she looks like a pineapple rather than it being that she eats it.

Lastly, we were able to make slimy sap for them to take home. I tried fooling the kids into thinking there was a fake bug inside, but they caught on to my tricks pretty quickly. Even though their bug was fake, they had a great time pretending that it was stuck in the sap and oozing out of their hands.

Thanks Ms. Wickes class for making my Thursday awesome. We hope to visit you again soon!