Sherwood Forest Elementary School is our Spotlight School of the Week 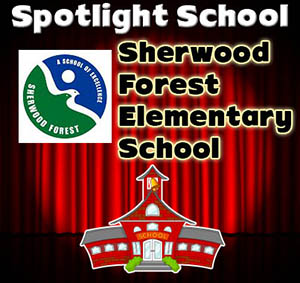 Once upon a time, in a land far away, there was a forest. And in that forest, there was a school. This school was filled with smart and confident junior scientists ready to learn. And this magical place was called Sherwood Forest Elementary School. Scientist Christine had the opportunity to visit this enchanted school on the morn of March 26th. But it wasn’t as easy as that.

Scientist Christine had to fight her way against sleepiness, traffic, and the sun rising in the east reflecting in her rear view mirror. But she proved triumphant and cascaded her way into the warm and inviting school. To her surprise though, what appeared to be a rectangular building on the outside, was filled with mazes in the inside. Once she navigated her way through the mousetrap, she peeked her head into her first class, Mrs. Peters’ class. There she was greeted by twenty first graders. They had twinkles in their eyes and grins on their faces. In an instance, the junior scientists magically transformed into geologists. Not only did Mrs. Peters’ class change into geologists, but so did Mrs. Farnum’s class, and Mrs. May’s class.

The story goes that Scientist Christine even met I a heroic geologist that brought in their own rocks and minerals! Could this be true? I guess we’ll never know for sure. That’s how legends are made.