Fox Road Elementary School is our Spotlight School of the Week 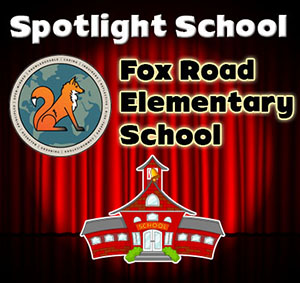 Today I had a shocking experience with Fox Road 4th Graders in our Electrifying Adventures Camp! We explored the wonders of electricity with some awesome hands-on experiments!

This program is one of my personal favorites because it involves the amazing Van De Graaff generator! This cool machine uses a spinning rubber band to build incredible amounts of static electricity. If you’ve ever seen a picture of someone holding a strange silver ball with their hair standing up, you know this machine!

What takes this experiment to the next level is the way it can be used to produce lightning! Lightning is formed thanks to friction in the air between water molecules and various air molecules. As the storm builds, the huge changes in air pressure push water molecules to and fro, building electrical charges in the air! The base layer of the clouds build an incredibly strong positive charge which repels any positively charged particles on the earth’s surface. This results in an equally strong negative charge down here around the surface. Once this charge becomes strong enough, the positive and negatively charged particles are pulled toward each other producing an electrical charge that can be 5 times hotter than the surface of the sun!

The Van De Graaff generator recreates this process in miniature. As the rubber band spins, it acts like the water in the air. The rubber band removes negatively charged particles from the silver ball, giving the ball a positive charge. The rubber band then deposits the negatively charged particles into an attachment called the Lightning Wand. When I bring this wand close to the silver ball on the top of the generator, a static electric spark up to 6 inches long forms!

This is always a huge hit in the classroom! I love hearing the students freak out when the first spark bursts through the air! It really is a hair raising experience!

Thanks Fox Road for an amazing Day!