East Clayton Elementary School is our Spotlight School of the Week 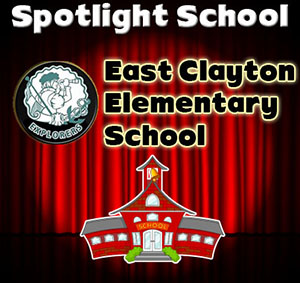 Physics. What in an incredibly interesting science. Just thinking about the complexity of matter, molecules, and atoms gets me excited to share my knowledge with students. I was so glad the students at East Clayton Elementary School were up for learning more. As their glowing faces walked into the classroom, I knew they were ready to become scientists. Who am I kidding, they were already scientists! They were even wearing their own decorated lab coats.
As I started the program, I knew we were going to be able to go into the depths of physics. They impressed me with their knowledge of the main states of matter as well as the properties in distinguishing them from each other. One of my favorite experiments to show them is how we can melt metal in the classroom. I’ll admit, this isn’t your normal metal, but instead a metal called gallium. We are actually able to melt gallium at a very low temperature, showing the process of changing states of matter.

Since they were able to grasp the basics of physics, I knew it was time to get into more detail with THERMAL EXPANSION! This may sound a bit scary, but the students were amazed with the first demonstration. We put a balloon on top of a beaker and changed the temperature of the air. The result was the balloon inflated when the air inside was heated and shrunk as we cooled the air off. The students quickly realized that the molecules that made up the air were spreading out and getting close together depending on the temperature.

To further understand thermal expansion we used some unique materials to investigate what happens to water as it turns from a liquid to solid state. We came up with a hypothesis based on what we learned with the balloon. Interestingly enough, after we did the experiment, we figured out that water actually gets bigger as it turns from the liquid to solid state. This led to a discussion on whether or not it was acceptable for our hypothesis to be incorrect. I admitted to them that scientists are often wrong when making a hypothesis and that isn’t a bad thing, because it means we learned something.

As a cool surprise, I turned their fake ice into glow in the dark ice for them to take home. You can’t go wrong when you make things glow in the dark. To finish things off, we erupted a volcano as we talked about the reactions of the matter we were adding.

Thanks again East Clayton for making my Friday an awesome day. I hope you all continue to be the amazing scientists that you are and continue discovering the world around you.