HOSPITAL: Duke University Hospital, Pediatrics is our Spotlight of the Week 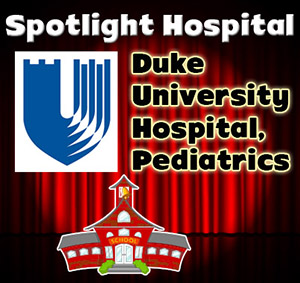 This week, I have a different story to tell…

It was just passed 3:00 pm on Monday, December 11th. I only had to circle the familiar parking deck for a few minutes before sliding into a spot just big enough for my car. I caught myself saying, “Yes!” under my breath–I’d avoided 8 more levels of circling! A draft of chilly December air surrounded me as I pulled my program from the trunk. It was the lightest load I’ve ever had, at one half-full bin and a small ice bucket! But that’s all I would need, because today was special: I wasn’t doing a program for 20 or 30 kids, and I wasn’t even at an elementary school; in fact, it was likely that there would be fewer than 10…

I rode the elevator down to the tunnel that would take me under the road. (A scientist never waits at a crosswalk if he can avoid it! Plus, the tunnel used to be a tram system–how cool is that?) The curving corridor lead me to a semicircle of five elevators; I took the second on the left, and after that brief rollercoaster moment in my stomach, I emerged on the fifth floor of Duke University Hospital, Pediatrics.

After my hand-washing and shoe cover-donning routine, I found Scientist Jen already in the room waiting for me. We were really excited to meet with the kids in the Pediatric Blood & Marrow Transplant Center today, because our experiments were all Winter themed! We were joined shortly by our Junior Scientists, three middle school-aged girls who Scientist Jen and I recognized from other programs. We started off with ice fishing, for which we used a reaction between salt and ice to pick up ice cubes–one Scientist picked up her whole tray of ice! Next we each endeavored to create hail in a jar, using hydrogen citrate, sodium bicarbonate, dihydrogen monoxide, and–the most important ingredient–pasta! And lastly we used sodium polyacrylate, a type of super absorbent powder, to create some squishy, synthetic snow!

It was snow fun to experiment with these kids. (Sorry, I had to!) Since there were only three today, we could do each experiment many times, and we were able to answer every question they asked. After an hour they returned to their rooms with stickers in their event passports and bags of extra experiments they could do later, and we journeyed back through the tunnel to our cars, ready to return in the new year! Though our bimonthly programs are just a small part of the events organized for these kids, we’re always so happy to see them leaving with smiles on their faces every time!