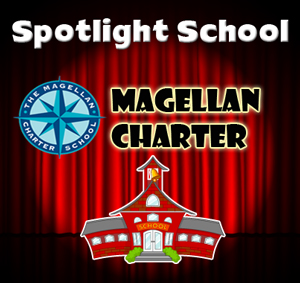 This week, I had the opportunity to travel to Magellan Charter School and work with the third graders there on a program called “Motion Commotion.” This program is all about Physics and making sense out of how and why things move. The students had not yet started their Force and Motion unit, so this was sure to be a fun first step!

I described this program as their introduction to the Force and Motion unit, and instead of getting worried or confused looks, I got eyes full of excitement and curiosity. They were so enthusiastic to learn about the Laws of Motion that they use every day. These Junior Physicists were ready to learn through conducting their own experiments!

This program is heavily lab-based so that the children get a chance to freely explore and learn with various force, motion, gravity, and friction experiments. As I circled the room watching them try all the items I brought for them, I realized their excitement was contagious. I was having a ball with my little Physicists! Not only were they having a blast with the activities, but they were also mastering scientific concepts without even knowing it. They were constantly making new discoveries with the experiments and asking very thought-provoking questions, as all scientists must do.

Experimenting with the third graders at Magellan Charter was such a fun time. Seeing their excitement for new knowledge and their enthusiasm to listen and learn was the best way I could have spent my Tuesday. Thank you to the students and staff that made my day so enjoyable!