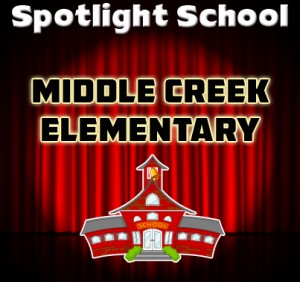 What an awesome start to my Thursday getting to spend it at Middle Creek. This has always been one of my favorite schools to visit, especially 5th grade.

Today’s program was called Newton’s Lab, so we were going to talk all about physics. Physics can be a frightening topic to young scientists, so I made sure to bring in my best experiments.

One of my favorite experiments I did with the 5th graders was launching catapults. Who wouldn’t love launching objects through the air in your classroom? We launched different objects that varied in mass towards a student holding a basket. They were challenged to catch 5 items that were being catapulted towards them. Through this activity we learned about how these items launched based on mass, momentum, and the air resistance. We had some truly dominating teams using the catapults. They might have been pretty successful as a viking.

After the catapults, we built a balloon powered car that helped us to better understand and relate the three laws of motion. It took us some time, but a think we all managed to construct our cars. We might have needed a little help from the girls tying those balloons to the straws. They seemed to be a little better at it than the boys. I think it’s pretty safe to say that only popping 4 balloons throughout the day would be considered pretty successful.

To finish off our program, we went outside to launch water rockets. Luckily, it ended up being a pretty nice day. We found an excellent spot to launch the rockets towards a basketball hoop. We had several close baskets, but no one was able to make it in. For the record, I’m not sure I would have been able to make it either.

Thanks Middle Creek 5th grade for making my experience there an awesome one. I hope you guys had a great time and hopefully I’ll see you guys for your next program!