White Oak Elementary School is our Spotlight School of the Week 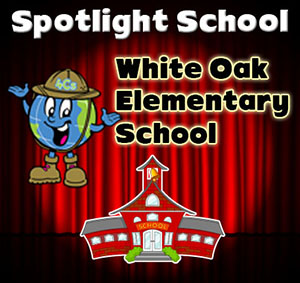 We learned what “mattered” at White Oak Elementary School through “Solids vs. Liquids”. The students transformed into physicists for the day and learned that not only are there three states of matter (actually four, but for today’s purposes, we focused on three), but those three states of matter can undergo change. Gallium, a metal that has a melting point at 85 degrees Fahrenheit, can be changed from a solid to a liquid. This is done by adding heat to the Gallium. The students were “melting” in their seats when they saw the Gallium turn to liquid. We watched a balloon fill with air by adding heat. When the heat was added, the molecules began to spread out, causing the balloon to expand. Seeing the scientists grasp the understanding of this concept is so exciting!

The scientists then took on their own experiment and made science ice! This is more fun than regular ice because it cannot melt. The scientists used super absorbent crystals to make their science ice. Water had to be added to the super absorbent crystals with pipettes to make it become science ice. Then, it became “chilly” as the students experimented with ice fishing using ice, water, fishing poles and salt. They learned that when they add salt to the ice it begins to melt, then after a short period of time it refreezes. If the scientists lay their fishing poles on the ice and then add the salt, then the fishing pole will stick to the ice! How “cool” is that?

The second grade physicists had a “solid” understanding of matter by the time they were done with their experiments. It is always exciting to have a class who is thrilled about science and the students at White Oak were definitely just that. Although the students were anxiously awaiting the arrival of snow, they were still very engaged in all of the science experiments. I hope to visit the scientists at White Oak again very soon!