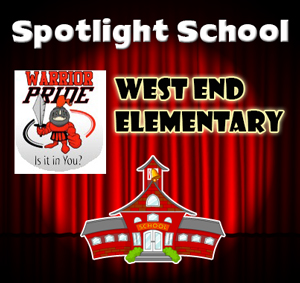 I followed the moon to West End. Who wrote that lyric? Me, Scientist Christine. And actually, it’s not a lyric at all. It’s what I did. Huh? Occasionally, I travel to schools that are not only far away, but the first program is early. How early? So early, the full moon was shining brightly for the entire journey south. Luckily, for me, I love driving early in the morning. Reminds me of when I was kid, and we would have to wake up early to start our sixteen hour car ride to New York to visit family. Sometimes driving that early, can make you sleepy. The road is dark, there is little traffic, and it is very quiet out. I decided to play a game using the moon. I knew, being a scientist, that when the moon is full it is directly across from the sun. And if the sun rises in the east, then the moon is directly to the west. Using this knowledge, I constantly was keeping track of what direction I was going…southwest, west, south east. It was a fun way to keep my mind occupied, and when I pulled into West End’s parking lot, guess what? I was facing west. Guess that’s where the name comes from.

Space…weather…lightning…electricity! Electricity was our topic of the day with West End’s fourth graders. We created current electricity, opened and closed circuits, and made some static electricity of our own. Do you make static electricity using a balloon and your hair? No way, we have something way cooler…A Van de Graaff! What is that? It’s a tool for making static electricity. It involves a big rubber band rubbing against a piece of copper and creating friction. Once enough friction happens, electrons are lost, and the Van de Graaff sphere becomes negatively charged. Now it has extra stored energy that it wants to get rid of, and it wants to balance back out. Once it can gain some electrons back, it discharges its stored electricity and becomes balanced once again. I showed how a Van de Graaff can repel other negatively charged items, how it can create small lightning bolts, and my favorite, how it can make someone’s hair stand on end. I usually have time for a few volunteers to try. The brave electrical engineers did an amazing job. At the end of the volunteers, I always ask the classroom teacher if she would like to try. All the teachers at West End said, “Yes!” It was electrifying! They did a great job, and the students were “shocked” to see their teachers rock a new hairdo.

Looking forward to the next time I can follow the moon to West End! This “hair raising” school is worth another trip!