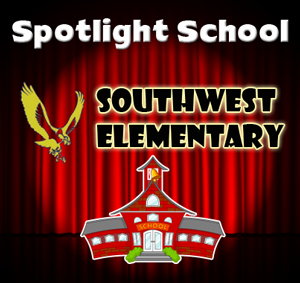 I have been having the best week ever! “Why?” you ask. Because I not only get to go to Southwest Elementary once this week, but twice. With the same grade, in fact. Which means I’ll get to see the same students too! Terrific. Which grade? 5th grade. Actually, a lot of my coworkers will be at Southwest this week. Why? Because 5th grade is participating in a program every day this week. Wow! Now that’s what I call some fun preparation for the EOG’s next week. Monday, the day I taught, we did Newton’s Lab, Tuesday is Eco Explorers, Wednesday will be Energy Matters, Thursday, I’ll be back with Storm Chasers, and their rounding out the week with Body Works on Friday. These will be some of the smartest 5th grade scientists you’ll ever meet.

Let me tell you a highlight about my day on Monday, teaching Newton’s Lab. The junior scientists became physicists and focused on force and motion. Oh, and of course, Newton’s Three Laws of Motion. Every class was amazed how I was able to create a force stronger than gravity, and prevented water from spilling all over the floor. How did I do it? I used a spinning platform and created speed and velocity, which then created a strong centripetal force, or “center seeking” force. This force became greater than gravity’s force and prevented the water from spilling. This goes along with Newton’s 2nd Law.

I had such a good time on Monday, I can’t wait to go back on Thursday, when the junior scientists will turn from physicists to meteorologists. As a sneak preview, we will be making lightning, clouds, and barometers. Hopefully, I will be able to amaze them as much as I did on Monday. See you soon!