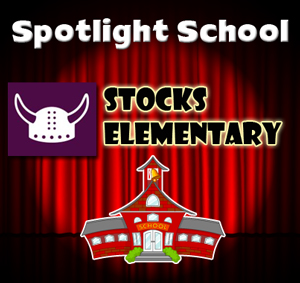 What an awesome day to go to Stocks Elementary! I was joined by several other scientists from Science Fun as well as other local scientists. Stocks was having a STEAM day where all the students spent the day doing hands on science activities. I wish I had one of these days when I was younger.

My sessions were with the second grade classes. We had an awesome time learning all about sound. The students had a little bit of background knowledge from their awesome teachers. They were really excited to share their knowledge with me. They told me all about sound travelling in waves, volume and even pitch.

Since they were so knowledgeable, it was time to get into experimenting. The students got the chance to use some tuning forks and create vibrations, which of course create sound. They had a blast using the tuning forks to vibrate different objects around them as well as their cheeks, noses, and ears. They got a kick out of me sneaking up and using the tuning fork on them. We also used a ping pong ball to demonstrate how sound waves travel through all states of matter. I didn’t even get a chance to explain before a student made the connection that the ping pong ball represented the molecules within matter and one vibrates the next and so on and so forth.

After we had a solid understanding of sound, we moved to figuring out how our ear works. One of the highlights is having them close their eyes and following my voice. Even though it’s such a simple activity, the students are amazed how the pinna on their ears helps their brain understand where the sound is coming from.

Finally it was time to make some sound slime. We were able to use chemicals to create a slime that would vibrate when air pockets got stuck in it. The kids quickly reminded me that vibrations create sound. We can all use our imaginations to determine what it sounded like. The kids has an awesome time with it. It was very rewarding hearing the students tell me it was their favorite session of the day and ask when I was coming back. Hopefully it’ll soon my friends! See you next time Stocks.