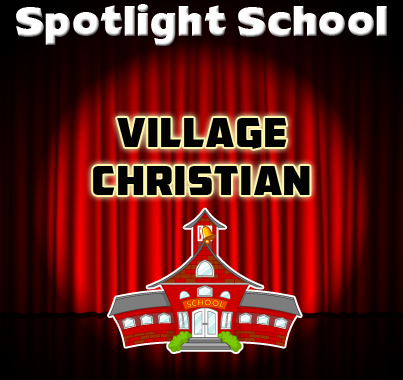 It’s been such a long time since I had the opportunity to visit Village Christian, so it was awesome news when I found out I got to go back this week. It was a very special day because I was able to teach the kindergarten and first grade classes and the best part is this was their first Science Fun for Everyone experience.

My day started off with two large but eager kindergarten classes. They really surprised me about their knowledge of space. The students were so knowledgeable that they were able to complete a first grade program. I think I might have found some future astronomers in those classes. They were even telling me all about what they learned about how we get our days and nights!

The next class was a combined session with two first grade classes. These students had such awesome and engaging questions that I thought I was in a room of astronauts. We had an awesome discussion about Earth and why it is such an awesome planet to live on. Finally, the students used some space sand to help remind them that Earth is the only planet we know of so far in our solar system that has enough water to sustain life.

My last two session were smaller single classes. Each of the classes were so creative recreating and making their own constellations using glow paper and UV lights. To end all of the sessions, we ventured outside to launch some water rockets as high into space as we could. What an awesome day it ended up being, too. Especially since my ride to Fayetteville was a bit rainy. The students had a blast launching the rockets into the air and even getting sprayed a little themselves. We might have even convinced a few teachers to get a little wet as well.

Thanks Village Christian for making my visit an awesome experience and impressing me with your science knowledge. I hope to visit you guys again soon!