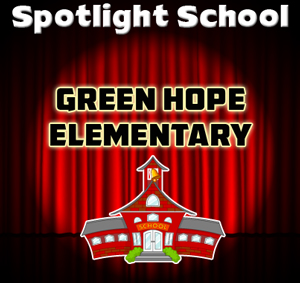 This week I was fortunate enough with the winter weather to still go to Green Hope Elementary School and talk to fifth graders about physics. We spent our 75 minutes talking about Isaac Newton and the great things he did specifically in the realm of how and why things move.

This program is mainly focused on the three laws of motion that Newton wrote and examples of how we can see these laws everyday. Simply talking through these laws can quickly become boring, but with the experiments that I brought in and added to each law, it became much more fun and the kids really enjoyed talking about these laws.

Once we went through the laws, it was time to put them into action with our catapult contest. With the class split into groups, the kids launched various objects with miniature catapults to a basket to see which team could catch the most. This activity is always great because the kids are able to see clearly how mass effects the amount of force necessary to accelerate an object.

After we talked about how each object behaved when launched with the catapult, it was time to make our balloon powered car. This take home experiment allowed the kids to add force to a car with a balloon so that it would accelerate on its own. They loved building something themselves and having it to take home to show their siblings how it works and the science behind it.

Going through this program with the Green Hope children was very cool for me because of how the kids responded. As I asked some tough questions about how objects behaved when launched from the catapult, I could see these kids really processing and giving really good answers to why things happened a certain way. Having kids that are that engaged in a program is a real treat for me to see.