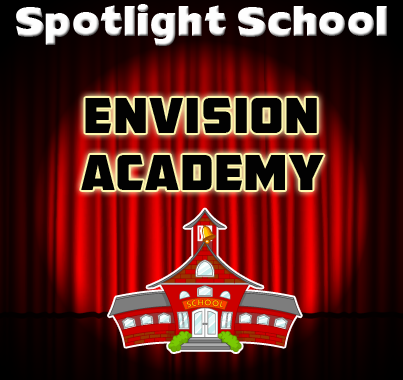 The other day I had the pleasure of visiting the 3rd graders at Envision Academy for the second time this school year. Together we explored the world of physics and studied motion and friction. First we went back in time 400 years to learn about Sir Isaac Newton’s 3 laws of motion.

Later we used these three laws in free lab experiments, and the students got creative as they explored topics like gravity, friction, and mass. Student’s particularly liked innovating with our Newton’s cradles, swinging more than one of the balls at a time, and even placing them end to end. Students learned about friction by strapping on our friction shoes and walking around the room. Shoes with different surfaces produced different amounts of friction on the floor. Who knew physics could be so fun?

In our final experiments we learned about action/reaction by launching alka seltzer rockets. One student declared, “I’m going to make one of those at home,” so watch out Mom and Dad for the next big names in rocketry. Finally students were able to construct and take home their very own friction tube. We had friction tube races and learned more about friction by trying to get a marble in a test tube full of sand from one end of the tube to the other.

Over all we had a very exciting day learning about some of the basic forces at work around us. I know the third grade at envision academy were excited to be physicists for a day, and they can say that word three times fast pretty well!